It was a jolly good time, it was

Day two of this MoBlo or whatever it's called and I'm already scrambling. Inspiration or copier toner hit me this afternoon and I suddenly thought: "I wonder if I can find that old house I lived in back in the Summer of '89" So I tried. I think that the image below is what I knew as Brokengall Cottage, Widbury Hill, Ware, Hertforshire. 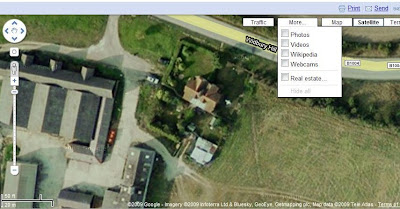 I have a very poor memory. All sorts of things are jumbled up - the little tudor building overhanging High Street (or was that in Hertford?), the pub that served elderberry wine, the canal that ran past the maltings, carrying with it a very distinctive fermenting smell. Actually, I thought it smelled a lot like cocaine, which just goes to show that I've always been adept at merging the old and the new.

I lived in Brockengall Cottage with my girlfriend, a fellow who epitomized the term "bloke" and a possibly malnourished Scottish lass. Only the bloke had a car, so every morning I got up and walked to my workplace through, I kid you not, a barley field. For the life of me I can't remember the name of the place where I worked - some council office. I processed student transport applications. The other folks there were involved in other aspects of transportation. There was the young Irishman who answered the transport information line. I'm not sure why they put someone who had no idea where he was in charge of advising callers on the best route between Ware and Much Haddam or St. Albans or wherever. But he had a charming accent. Also in the office were two old gents who drove double decker buses in London during the Blitz. I should have listened more carefully to their stories. They spent a lot of time fielding frantic questions from the Irishman, because they had all the routes memorized. The old guys were terribly worried that I wasn't seeing enough of England. I was young and had different ideas about entertainment, i.e. sex had a higher priority than the Tower of London.

During lunch I went to the little canteen, which was, for some reason, vegetarian. They served spaghetti on toast, beans on toast, cheese on toast. Pretty much anything on toast. I usually got an apple, walnut and honey sandwich.

Funny that I don't remember much about getting back and forth from the cottage to work, except for the mornings it rained and the barley field turned to sludge. I don't remember the walk back at all. How odd.

I think I drank most of what I earned. That seemed to be what everyone did. A pound a pint. I used to get something called a Snakebite (is it still called that?), half lager and half cider. Sometimes I had lager and lime instead. Then we would stagger along High Street. How we got home I can't imagine. Must have been the bloke. Anyway, the British take that designated driver stuff seriously.

I have this reminder of those days, a poem I wrote after I returned to New York:

I hear rain. No, it’s the farmer burning
his field. Smoke drags
along the ground, snagging
like wool in the stubble.
The horse’s hooves explode
against the gate. Nothing happens.
The fence is sturdy.
He snorts and butts all morning.
Locked in their pens
the dogs yelp and stumble.

Night moths fly through open
windows and drown in glass of water.
In darkness I hold
the glass to the moonlight.
Half-awake I once swallowed a moth.
But it stayed down. It stayed put.

In the days of the plague
corpses from London were dumped in the marsh
between this town and the next.
A tangle of bones
braced against a weight of mud.
Above, the smooth slates
of water spread undisturbed.

I saw the Lady of Shallot pinioned
in hyper-reality, menaced by detail –
the jeweled flowers, the chiseled leaves,
her revelation somewhere to my right.
As always the point of focus
was outside my field of vision.

I think of her when I stand by the canal.
Underwater weeds splay
like a drowned woman’s hair.

New York uncoils in the dream, knives
and teeth tear at the wildflowers
in the hearth.
The floorboards creak
with an unknown weight.
The restless dogs nip and worry
something that squeals.
Outside the door I find a rabbit’s foot
and, further toward the road,
the deflated carcass.