I've been thinking a bit more about Queen of Hearts, because that's how far my brain will stretch at the moment, and how the items I used to think were tacky or just "there" are now sought-after antiques.

How many of you grew up with one of these? 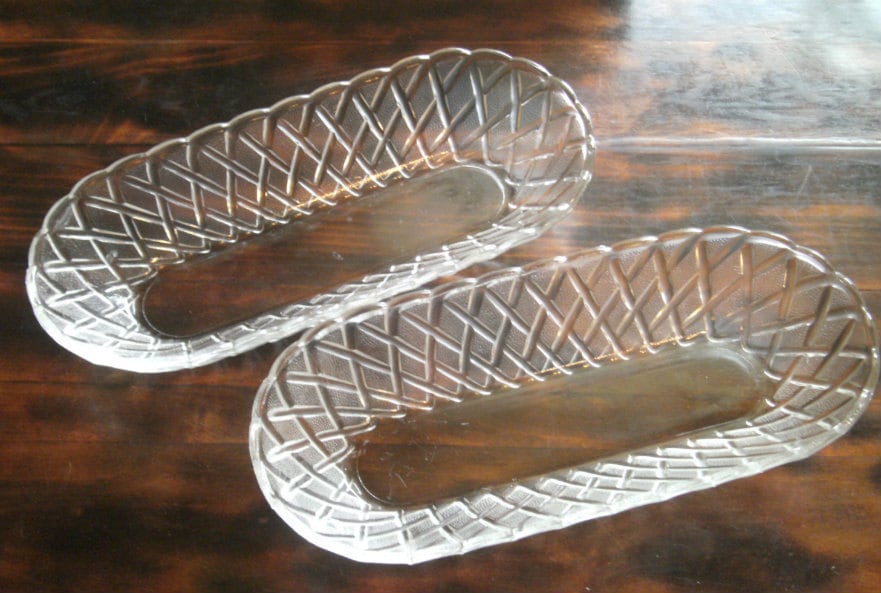 These are glass relish bowls. But in our house they were used for serving cranberry sauce. And by cranberry sauce I mean the stuff in a can that slurps out in one cylindrical jellyish piece. My mom would then slice it, and lay the slices out prettily in one of these little dishes. It was an absolute horror when I discovered that people at it with actual whole cranberries. Gross. Anyway, I have one of these in my cabinets now, as I absconded with it and another cut-glass serving dish, that I doubt my brother has much use for.

We also had these for a while: I think they were amber. These were always filled with iced tea. At some point they were replaced with something more modern and equally ugly. Only now they've been imbued with a certain dignity, and they're waiting to be snapped up in an antique store. Why my mother didn't have the common sense to buy the blue ones, I don't know.

Now, if I could find replicas of the absolutely hideous lamps we had in the living room. They were awful, but I loved them. The base was a translucent green and made me think of genies living in lamps. It looked a bit like this, but a darker green and smooth: 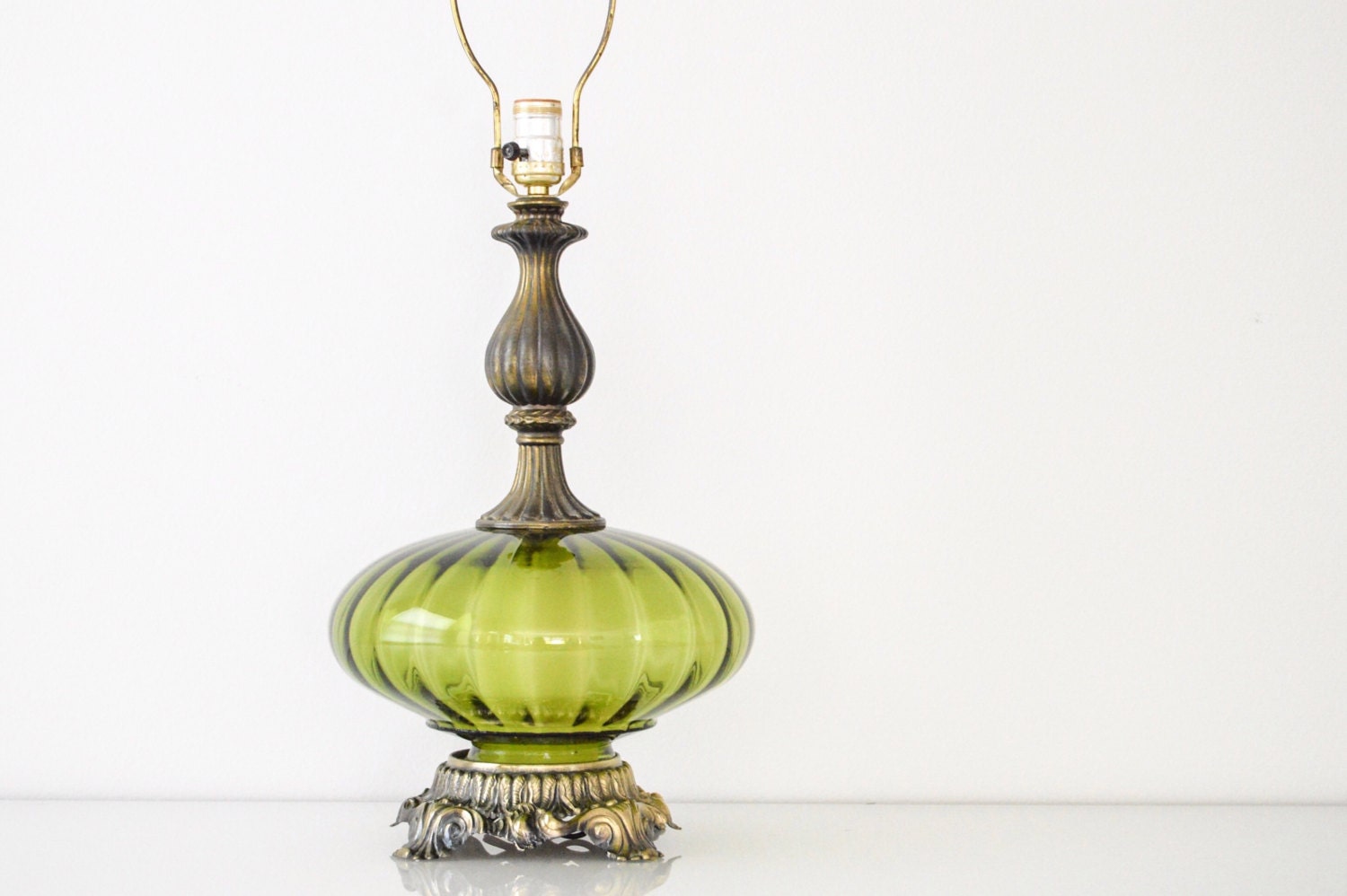 I say "if I could find" as if Jeff would ever let these cross our threshold. We don't even have end tables, which would have baffled my mom.

Finally, a walk down memory lane wouldn't be complete without mentioning our TV trays. OF COURSE we had TV trays. Only communists didn't have them. The ones I remember best had vividly rendered paintings of autumn in New England that made me absolutely certain that I lived in the worst place on earth. Our leaves couldn't even get up the energy to change colors. They just lost hope, turned brown and fell. Actually, I suspect they were paintings of the four seasons, but fall was the most captivating. This looks very much like them - I gather the artist was named Robert Wood. 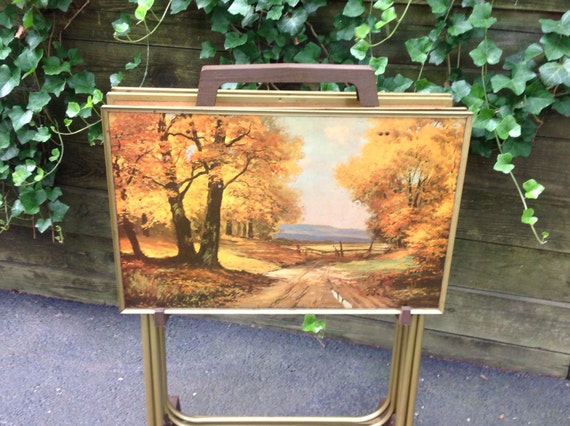 So, to wrap up this day of reminiscing I bought a bottle of Pine-Sol. It doesn't smell quite the way I remember. Maybe they got rid of some carcinogenic chemical or started using real pine essence or stopped using real pine essence. It's a bit disappointing. Hah, just found out that you can order the original formulation here. No I can only hope Silly Putty does the same.

This past weekend Jeff took me to a special store called Queen of Hearts. Sounds like the perfect store for Bad Alice, doesn’t it? And it is.

Queen of Hearts is an antique store that houses staged displays from different dealers. Oh my God, I wanted to just roll around in the glory of it all. There were wonderful pieces of furniture, some of them as-is and some of them gussied up in interesting ways. One section had cookie jars. One gentleman specialized in vintage license plates. There were more cigar boxes than any Pinterest crafter could ever want.

But it was generally the small things that caught my eye, like the set of pink mixing bowls with the strawberry motif, and the casserole dishes - you know the ones - with little flowers. Most of them flooded me with a sense of nostalgia. A spinning wheel like the one in my paternal grandfather’s house. A butter churn like the one I found in my maternal grandparents’ basement. A straw purse with hideous flowers like one my mom had. Old Butterick patterns. Jeff even found some books on record, pulling out by chance one that contained Black Beauty with, of all things, my first name written on it in marker.

By that time I was beginning to feel a bit teary eyed. I missed my parents. I remembered my mom cutting out fabric on the kitchen table - she never pinned but instead weighted the pattern pieces with table knives. She had an old fruitcake tin filled with buttons (I still have those buttons) and an old Whitman’s Sampler box filled with thread, some of it so old it was on wooden spools. I remembered my dad’s old cigar boxes filled with arrowheads. In storage there are two old, heavy black typewriters much nicer than the ones I saw on display. Soon a chain of associations led me further afield. When Abby was little my dad found a huge lot of Matchbox cars at a flea market and gave them to her. Whenever I open the cabinet where I keep our spices, I smell the same timeless scent I smelled in our spice cabinet growing up, and I’ve stashed my mom’s recipe box there. In one section of the store I found a few old thermoses, the kind with the glass interiors that always broke. How many times I went to drink my lunch milk and found shards floating on top. Whatever happened, I wondered, to the metal Laugh-in lunchbox I used in first grade, with a paper name tag held in place by grubby scotch tape curling up at the edges?

Oh, I wanted to buy so many things, as if I could somehow recapture the best moments of my childhood and carry them with me when I left the store. Instead we left with a set of sundae glasses, something my family never owned, and surprised the girls with ice cream and fudge sauce.
Posted by Bad Alice at 11:47 AM 6 comments:

Email ThisBlogThis!Share to TwitterShare to FacebookShare to Pinterest
Labels: nostalgia, queen of hearts

This weekend was a respite from the not-quite-enough-air issue I've been having. But here it is Sunday night and whaddaya know, I feel like there's a live squirrel running around inside my head. This tells me I was meant for a life of leisure.

I was mentioning my panic and anxiety to Jeff the other day and he said, why, you don't have anything to be stressed about. I don't know if he was joking, but I'm sure my life looks placid compared to his, which is full to the brim with lesson plans as well as the heavy lifting in making our finances work. But, I am a thirsty sponge that soaks up everyone's stress and stirs it into the pot of my own simmering anxiety. It takes very little, just Liz mentioning that her tooth hurts - my heart beats just a bit faster because we don't have insurance this month (long story), and she had oral surgery last month. Because we have no insurance we had to cancel Abby's therapy appointments, and she desperately needs help managing her own anxiety, which manifests as chronic headaches, stomach aches, fatigue, and muscle twitches. Jeff is spending his own money (because that's what teachers do) to supply his classroom, and after the bank account was overdrawn I suggested a credit card just for that purpose. And that reminds me of how much I hate the bitches who made his life so impossible at his last job. If I was ever tempted to embrace the dark arts, it would be in the hopes of blighting their lives.

When I first started talking about this in therapy, I began with "I don't really have that much to be stressed about" and ended up naming so many things: Abby's illness and my worries for her future, Liz's perfectionist streak and her lack of friends, Jeff's former job and the fierce protective anger I felt on his behalf, our desire to live somewhere else and my uncertainty about job prospects if we move. Or the fact that I feel this constant tug of war between my sense of myself and my work.

But now I need to go to sleep. And I hope I really sleep.

So I had a panic attack the other night. I think it was the culmination of two days of feeling as if I couldn't breathe properly. Obviously I was breathing and walking around and no one had to call an ambulance, but I felt like I couldn't draw in quite enough air. This led to lots of yawning and deep breaths and generally made the whole process that's supposed to be automatic a huge pain in the ass. Anyway, last night I was dealing once again with the breathing situation, when I stopped being able to swallow. Well, I could swallow water, I found. But clearing my throat - and the usual swallowing we do as a matter of course? Nah, my throat seized up. I decided I was probably dying of MS or ALS or something similar, and I would end up in a bed with a feeding tube and a ventilator and someone would have to suction out all my spit. So I had to talk myself down out of that tree. That went sort of like this:

Amygdala: You're going to die! There is something seriously wrong but we don't know what it is. Scour the Internet!
Me: I'm not dying. I can still breathe and swallow water *pause to drink water again*
Amygdala: Sure you can swallow it now, but for how long? And what about that breathing thing? How's that going?
Me:  Dammit! Maybe if I try to lie down...
Amygdala: Don't lie down! What if your throat closes up and you stop breathing? YOU NEED TO STAY AWAKE!
Me: Look it even says here that swallowing problems are a common feature of a panic attack.
Amygdala: Did I stutter? YOU'RE GOING TO DIE!

When I finally did get to sleep, I dreamed that Jeff was applying for a second job at Taco Bell. While I sat waiting for him, I began to wonder if Taco Bell had anything gluten free. Then I began to worry because Jeff hadn't come out. What if he already come out and didn't realize I was still there and had gone home? So I went home. And he wasn't there. So I began to fret that now he  was coming out of the interview and would be worried when I wasn't there. This conundrum was interrupted by the appearance of someone I worked with, She asked to take a picture of me, but then I was the one holding the camera phone up to the sky, and I saw cherry blossoms going in and out of focus on the screen.

Pretty much sunshine and roses here. And bees. Lots of bees.