I was reading a book today that encouraged you to let your freak flag fly, to find your obsession and go with it, because that's how you find your true calling. Nice as that sounds, I don't think that my tenacity at Googling photos of really good looking people can be leveraged into a job. But I'm open to suggestions. I'm also not sure that I have a freak flag, exactly. Maybe a shoelace.

But I do have my obsessions.

American Horror Story
I thought this series was fantastic. It delivered the big scares as well as a more diffuse and  disturbing creepiness. I don't usually watch or read horror - I'm too susceptible. I can't even look in a mirror in the dark, a fear that was the subject of one episode that now has me worried whenever I see a closed shower curtain. Horror holds up our fears and scares us with them all over again, and for some reason we really like that. American Horror Story delivered: home invasions, high school mass murders, rape, death, dark corners and spooky noises,  deformity, suicide, ghosts that CAN hurt you, sociopaths and the devil's spawn. And then there are the horrors that are more corrosive than scary, like infidelity, depression, and neglect. The ghosts in American Horror Story can’t escape the house where they died, a house with layer on layer of guilt, rage, and fear. The horror house is the collective American psyche, and we’re all, innocent and guilty alike, stuck in it. Meanwhile, I give you one of the high points of the series: Alexandra Breckinridge in her slutty maid’s outfit. She didn't wash the floors or climb ladders nearly enough.

A Madness of Angels, The Midnight Mayor and The Neon Court

I found this series by accident, attracted to the cover of the third book, The Neon Court. I love urban paranormal noir.  I’m a fan of the Harry Dresden and Sandman Slim books, both about gumshoe wizards. They keep going and the trouble keeps piling up faster than they can dig but that doesn’t keep them from maintaining a constant witty and droll patter. A Madness of Angels, though, is all that plus a new level of gorgeous. Each book is almost giddy with a love of the London cityscape, from which the wizard Matthew Swift draws his magic. The author’s descriptions of spells woven from the subways, bus shelters and litter are full of energy, wit, and lively imagination. The Angels, specifically the Blue Electric Angels, slid from the mouthpiece of a phone receiver into his dying body and now inhabit his brain in an uneasy alliance with his own personality (he isn't entirely certain he still has his own personality).  Matthew sometimes refers to himself as “we”. I think it’s a sign of how good the writing is that although I noticed the shift it didn’t drive me up the wall but just went with it.

I’ve heard this called Harry Potter for grownups, which I think does everyone a disservice. If Harry Potter were Dickens, I suppose The Magicians would be Trollope. I’m not even going to try to explain that, but it makes sense somewhere in the muddled recesses of my mind.  There’s a gifted teenager, Quentin, who finds himself (through an odd sequence of events) sitting a very strange exam at Brakebills, a school of magic. Thus begins his education (which rather reminded me of Arthur’s education in The Sword and the Stone) in magic, friendship, love, and betrayal.  He also happens to be obsessed with a series of children’s books that sound an awful lot like the Narnia stories, set in a world called Fillory. He discovers that Fillory is a real place, one that he and his magician friends can visit. It’s a pretty dark coming of age story - dark as in true to the reality of how many screw ups you make on your way to adulthood.  It takes an awful long time to develop any sort of true maturity. Near the end of The Magician King one of the characters in Fillory says something like this: “The hero isn’t the one who gains  the reward. The hero is the one who pays the price.” I thought that together the books were about the journey to that painful revelation.

Sherlock
I’ve blathered on about this before, but I adore the BBC adaptation. I think they did a brilliant job of modernizing the stories, and Benedict C and Martin Freeman are excellent.  I feel faint just listening to their line delivery. And now I'm waiting for the next installment. And I still want that coat.

Being Human (the British version)
I know - this has been out forever in the UK. But it hasn’t been streaming on Netflix for very long.  I think we usually mangle British shows when we import them. I tried to watch the American version of Being Human, and I just couldn’t. The characters on the American series lack the nuances and quirks of the British ones. We have taken the Vampire Diaries and smushed it into the basic Being Human framework. It’s slick and shallow and as far as I can tell is primarily about sex.  The British version, however, actually seems to be about figuring out what it means to be human. How do you transform the predatory and the invisible? I mean, their problems are ours writ large - selfish and greedy desire, addiction, timidity, fear, cowardice, rage, our animal nature. And THEN it's about sex. And Aidan Turner is just a better vampire. What sort of credible vampire looks like he goes to the gym everyday? Aidan looks more like he's shooting up in an alley somewhere.


Grimm
I love this show about the fairy tale creatures that live among us. Nick, played by David Giuntoli, is just beautiful. I like watching him shoot things. A descendant of the original brothers Grimm - who are hunters, not just story collectors - he is  The One Who Can See the Truth. He has a trailer full of weird weaponry and Encyclopedias of Hideous Monsters that he inherited from his aunt, and he's kind of playing it by ear because his aunt died before he could go through basic training. He’s also a cop, so it’s a bit like CSI in the Enchanted Forest. I love his friendship with the lovable werewolf Monroe, his go-to guy for all things supernatural. And his cop partner is great, too, even if he's unaware of exactly what's going on. That’s pretty much it, I think. Not a lot of depth, perhaps, but updating the stories of Red Riding Hood and Rapunzel and so forth really gives you a sense of the role fairy tales play in dealing with a dark and often frightening world.

White Collar
Why haven’t I watched this before? I’m catching up on Netflix and loving it. The conman/forger/thief Neal Caffrey is so exuberantly charming you want to smile and wear a fedora. An actor could easily flub it and come off as smarmy and crass. Instead he’s rather sweet, one of those bad guys who’s decent at heart. His developing friendship with the FBI agent responsible for him is fun to watch, as they try to figure out how far to trust each other. And his old friend and partner in crime is adorable - always there for him, ready to come through in a crisis and help him concoct ridiculous schemes, always ready to offer a conspiracy theory and a boot-kick to authority. The actor playing Nick, Matt Bomer, has stunning blue eyes, the kind of eyes that make you catch your breath when they hit you full-force. There are a lot of pretty people, but only a few have eyes that give me butterflies.

(Richard Armitage is another example. I’ll take any opportunity to talk about Richard Armitage. Like... he’s going to be in the Hobbit movie with just about every other sexy British actor, including the two from Sherlock and the vampire from Being Human). I supposed they have what are called “bedroom eyes,” but their gaze seems more existential than that, as if they’ve bored down to your essence. (If I were really clever I could now insert something about Lacan and “the gaze.” But philosophers have a way of reducing what seems to be a nifty insight into utter boredom. Or not reduce - philosophers never reduce anything; they expand endlessly.)

Someday this Pain Will Be Useful to You
If only this book were around when I was a teenager. It’s compared with Catcher in the Rye, which is inevitable, but I was never all that fond of Holden Caufield.  I love James Svek, though. He’s a teenager in love with words, who feels wildly out of place. He's obsessed with looking up houses for sale in the Midwest and wants to move there (you get a sense of why later in the story). He has a dark sense of humor and a keen sense of the absurdity around him. Here’s a snippet of conversation with his father:

“You should have ordered a steak or something,” my father said. “You should never order pasta as a main course. It isn’t manly.”
“I’ll keep that in mind,” I said.
“No, you won’t,” said my father. “And listen, while we’re talking about this, let me ask you something.”
“What?”
“Are you gay? 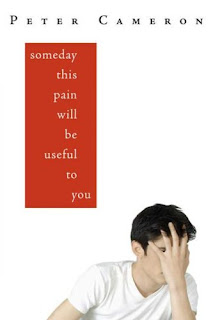 “What?” I asked. “Why would you ask me that?”
“Why? Why not? I just want to know.”
“Why? Do you get to take an extra deduction on your taxes or something.?”
“Very funny, James. No. It’s just that we’ve never talked about your sexuality, and if you are gay I want to be properly supportive. It’s fine with me if you’re gay, I just want you to know.”
“You wouldn’t be supportive if I were straight?”

He’s precocious and clever, defiantly alone at the same time that he tries awkwardly (and disastrously) to connect. The descriptions of his emotional state are finely nuanced: “I ... just let everything go, turned the net of myself inside out and let all the worried desperate fish swim away.” How beautiful is that? You learn indirectly that he witnessed the attack on the Twin Towers, and the stories of those lost, particularly those who were missing but no one noticed at first, have contributed to his fear of never making the leap from loneliness to companionship.

So that's how I've been spending my time. Or at least when I'm not looking up funny cat videos on YouTube.
Posted by Bad Alice at 12:18 AM 1 comment:

Email ThisBlogThis!Share to TwitterShare to FacebookShare to Pinterest
Labels: A Madness of Angels, American Horror Story, Being Human, extraordinarily hot men, Grimm, Someday this pain will be useful to you, The Magicians, White Collar
Newer Posts Older Posts Home
Subscribe to: Posts (Atom)