When we asked DramaQueen what she wanted for her birthday, she decided on a trip to The Wizarding World of Harry Potter. So that's where we spent part of Spring break.

It is awesome. Except for the insane hoards exploding out of the windy paths, its a joy to wander through. Hogsmeade is a gem, a work of art, really. Look at Hogwarts - it's fabulous. 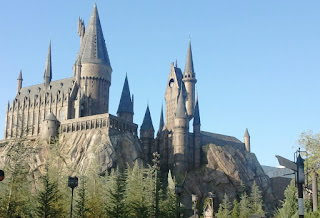 We stayed at this fabulous, swanky resort. The sort of place you can call housekeeping and say, "I forgot deodorant," and they reply, "No problem. We'll bring some right up." I was tempted to call and ask for random things, like a pregnancy test or condoms. Or both.

Anyway, because we stayed at this posh resort practically on top of the park, we got Express Passes and early admission to the park. We heard that the best thing to do was to get there at 7 am and head strait for Harry Potter and the Forbidden Journey, the ride that's in Hogwarts Castle. It's the main attraction and a feat of theme park technological wizardry (he he).

It's also scary as hell. I thought it was a sort of safe for the whole family ride. Turns out it wasn't even safe for me. (I can hear some of you hardened theme park aficionados snickering at this.)

But, damn. You're bolted down in these benches - "enchanted benches" I later learned they were called - and then you move along the conveyor belt of doom while the benches pitch you about. I don't think we went upside down but I remember being flat on my back at some point and then face down. I knew going in of course that the highlight was the filmed projections that put you into the action. I was hoping for the best. I have problems processing film that is right in my face and surrounding me, and swooping visually down through the trees while being tossed about by possessed benches was very unpleasant. I gave up and closed my eyes. At some point there was a roar and a blast of hot air. I think that was a dragon. I missed the spider entirely.

If you so desire, you can get a vague sense of what it was like in this video. I enjoyed seeing what I missed from the comfort of my sofa.


It seems so short on video.

That photo of the enchanted benches is from this Orlando Informer article devoted to the castle and ride, which includes some wonderful photos of the various sets and props you pass through on your way to the ride. There's also a link to a "behind the scenes" video that shows the mechanics of how the ride works. If I had seen that before going, perhaps I wouldn't have been so unsettled.

The other highlight was our visit to Olivanders wand shop. You stand in line for an hour or two and are ushered in in groups of 20 or so. One child is picked from the crowd to be "the chosen one" who will demonstrate how the wand chooses the wizard. Of course DramaQueen wanted to be picked. I didn't have much hope of it, but by golly she was! The show was delightful. The actor playing the wizard was having a fine time creating an atmosphere of awe and mystery. It was also so dim I didn't move for fear of walking into someone. So no photos in there. A flash would have destroyed the effect. Yes I still feel guilty for not memorializing the moment.

Some young wizards and witches stopped by while we were waiting in line for Olivanders. I am quite sad that we missed the toad chorus.


You can't go to Hogsmeade without trying the Butterbeer. Happily, it was recently reformulated to be both dairy-free and gluten-free, so I was able to partake. It tastes like cream soda with foamy, vaguely buttery fluff on top.


There is talk of creating a Hogwarts train ride, which would be so awesome. It could be Universal's monorail.

The village is full of fun details. I ran across a placard for Gringott's Bank - it was next to an ATM. Most of the buildings were facade's only - you couldn't go in. But the window displays were charming and artful, with references to items in the book series.


I really wanted to capture this window display with all Lockhart's books and the moving photos, but I just couldn't do it justice. 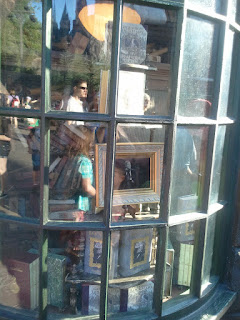 Dervish & Banges is the main gift shop, and it was specially designed to be impossible to navigate, partly because the Owl Post feeds into it, and Olivanders exits into the Owl Post, which is about the width of a train corridor and the main place to purchase your wand, which are stacked up along all the walls. And DramaQueen had to open them all before choosing her wand. A checkout counter, looking like an authentic postal counter, is bang in the middle of the Owl Post. After a while you feel like clocking someone. That's a good time to find another mug of Butterbeer.

Somehow I didn't get any photos of Zonko's Joke Shop or Duke's Sweetshop. I think by that time the crowds were at their height. DramaQueen bought a screaming yo-yo, a golden snitch and a chocolate frog.


Now Firecracker is not the biggest HP fan, and she was traumatized by the Forbidden Journey ride. So we had to spend some time in the Dr. Suess area. 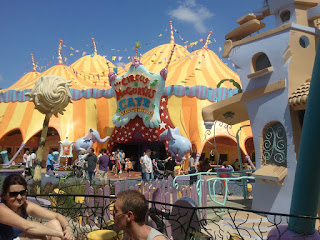 She rode Red Fish Blue Fish three times. I rode it twice. We got soaked.


The next day we went to the Universal Studios side. We were too exhausted to do much.


Well, Dear Husband and I were, but Abby did just fine.

DramaQueen loves the I Love Lucy show. She bought a Vitameatavegimin magnet. 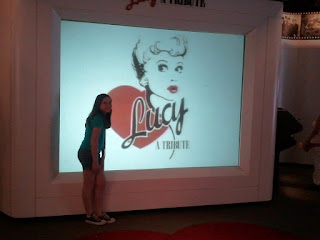 And that's all. I'm winding this up not exactly because that's all I have to say but because this post has been hanging around for days and it's irritating me.