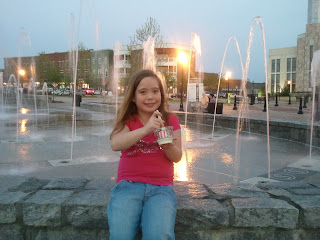 Now Firecracker gets her turn. Here are random facts about the cutest little 9 year old evah.

1. Is very affectionate and cuddly.
2. Loves our cats, Cheeto and Dorito, thoroughly and vigorously.
3. If she ever accidentally hurts them, she writes them notes of apology. She also draws pictures for them.
4. She never cared for baby dolls or Barbie dolls, but she's very attached to her huge family of stuffed animals. 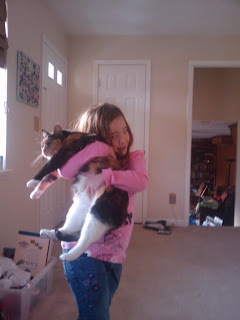 5. Has a sweet-tooth. Heck, she has a mouth full of  'em.
6. Likes playing with toy cars and plans to buy a toy car wash.
7. Has beautiful caramel-colored hair with natural highlights. In the summer it looks as if she's been to the salon.
8. Has an incredible belly laugh. She sounds like she's vibrating.
9. For some reason really, really likes The Mentalist better than all other shows.
10. Likes to draw.
11. Does math for fun. You should have seen how excited she was that her teacher gave her a workbook for the summer.
12. Has problems with language processing and reading comprehension, but she likes going to the library and checking out lots of books. She particularly likes books about animals and encyclopedias. When she was little she use to make me check out all the Bing Bunny books at one time. Bing Bunny is awesome, by the way.
13. Once she starts playing, she becomes obsessed with the Wii, particularly the Sword Play game in Wii Resort.
14. Has a volatile temper, hence her nickname.
15. Calls meringues "merangutangs" and J.C. Penny "jennypenny."
16. Hates ants and bees. She was once stung by dozens of fire-ants, which resulted in an infection. Now she is highly suspicious of the lawn.
17. Has a hard time giving things up, even stuff she no longer plays with or uses. She therefore has a lot of Pokemon cards and Sillybandz.
18. Unlike DramaQueen, she prefers to spend her money rather than save it.
19. Has been bugging me for weeks to open this bloody Soda Pop making kit that Dear Husband got the kids for the summer.
20. Likes rocks. I used to come home and find all the rocks from the yard, and the neighbors' yards, in our living room or drying on the floor in the kitchen. I still find rocks in the washing machine from when she squirrels them away in her pockets.
21. Has Tuberous Sclerosis, which means she has benign growths in her brain that affect her memory and cognition and cause seizures (well controlled, happily).
22. She used to be so used to medical procedures that she barely flinched getting her blood drawn. Last time we all got flu shots, two of us had to hold her down. She ran out the building into the parking lot screaming and we had to keep our distance while her fury abated.
23. Still mourns the loss of Wormy, a worm some idiot at a summer camp put in a cup of dirt for her to take home. What were they thinking? After we convinced her to let Wormy go so he could get on with his wormy life, she cried for weeks. Sometimes she still randomly moans, "I miss Wormy!"
24.  Is terrified of thunderstorms.
25. Says she talks to God when she's angry, and he tells her when she needs to apologize.
26. We told her she was a chatterbox. She later asked what made her a "cheesebox."
27. Loves the songs Rolling in the Deep by Adele and Defying Gravity sung by the cast of Glee.
28. Thinks Goldilocks was extremely rude and can barely contain her outrage when she reads the story. She feels very sorry for the poor baby bear.
29. Does not like any fruits or vegetables. Now and then we can persuade her to gnaw on a baby carrot.
30. Prefers playing with boys.
Posted by Bad Alice at 9:02 PM