Hanging Out in the Subtext, Where It's Cool and Shady 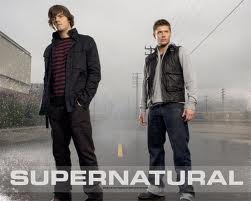 I love Supernatural. You see it's almost time for the season finale and I’m a little giddy with anticipation. And anxiety, because every now and then instead of a pocketful of wonderful you get a scrap of used hankie. But I love love love paranormal stuff that is kinda scary but not enough to make me sleep with the light on. Supernatural has great characters. The hunky monster hunting brothers Dean and Sam Winchester. Bobby, the ornery mentor/father figure/buddy fellow hunter (he says things like “idgit” - how can you not like that?) Castiel, the angel who rebelled and threw in his lot with humankind. Wraiths, demons, vampires, angels, the four horsemen of the apocalypse, Lucifer - what a guest list!. At its best the writing is snappy, with dialogue that makes you laugh with delight. Spiritual matters, needless to say, are frequently touched upon: Where is God and is he on our side? How do you combat evil? How do you handle the evil in yourself? Themes such as the value of family and friendship, trust and betrayal, courage and sacrifice figure prominently. Usually the show doesn't take itself too seriously.  It’s just a big kettle of wonderful.

But really, the best part? It’s so gay. It’s a big gay party every week. Unlike Glee or Modern Family there are no actual gay characters, but it's still really gay in a sly wink and nudge kind of way.

Fanfiction is a heartening proletariat genre - people take possession of the stories they love and rework them, elaborating on what interests them. Slash fiction, which pairs popular same-sex characters, is a big ol' online playground. There are forums and places to post rather embarrassing stories, and places to park even more embarrassing art. There are a lot of people out there making up gay story lines for the characters of Supernatural, ready to pounce on any look, gesture or dialogue that seems suspect.


You might think that a major mainstream TV show would be a bit freaked out and pretty much ignore all these fans teasing out the strands of gay in their creation. But naw, they're down with it. I mean, the writers aren’t going to let the characters hook up in the story, this being the subtext and not the actual plot, but the writers and cast seem to get a kick out of their fan’s obsessive enthusiasm and deliberately invoke it. In Supernatural, for instance, Dean and Sam are also characters in a comic book series (written by a prophet, no less; yeah this show frequently goes meta). In one episode Sam and Dean end up at a fan convention devoted to their fictional characters where they are surprised and a bit flustered to hear a panel announced on “The Homoerotic Subtext of Supernatural.” And all the fangirls go “Squeee!”


Besides the fans who pair the brothers themselves in a subgenre called "Wincest" (um, yeah, not reeeally in tune with that), there are those who favor Dean and the angel Castiel (damn right, too). I don’t know what the writers originally intended, but they’ve obviously decided to go with the flow of sentiment, helpfully including double-entendres and pointed banter between the two of them, and somehow Dean and Castiel exchange the longest gazes in history, and Dean always, always looks at Castiel’s lips. It’s a little weird, actually, and I always wonder if the actor playing Dean is completely aware of it. In any case, there's enough chemistry between the actors to be super swoony.

Here's a fine example of a slash video by a Dean/Castiel (Destiel) fan.This person has combed the cannon for those suggestive moments, massaged the story with some rather clever editing, and given an appropriate soundtrack ("Halo" was another song favored by Destiel enthusiasts). Note the little part at the end where the actor playing Dean (Jensen Ackles) explicitly (or maybe I should say "suggestively") gives a nod to the mad Destiel fantasists. I just had to show this even though it gives you a glimpse of how much time I waste on nonsense.


Oh, and there’s a demon named Crowley who removes souls via lip-lock. So if you want to make a deal with the devil, you get to exchange spit. I’m a wee bit surprised that Supernatural showed this in action, but I guess it was ok’d because no hot men were involved. In fact, there’s a bit of an eww factor.

Of course Dean and Castiel are never, ever going to get together on screen. Dean did romance a female angel at one point, so we know angels can get their freak on. But Dean is a real guy's guy, who would never in a million years consider the possibility of being gay. He's all about the ladies. And that's the point, of course, that's the fun. The writers of Supernatural didn't start out writing about an angel and human in love, but somehow with the dialogue and the chemistry between the actors, that story bleeds through the existing one, and then the fans hijacked the story, and because of the Internet, they have a rather surprising amount of influence.

I read somewhere (yeah, I'm not going to win any awards for source references) that women write the majority of slash fanfiction. Probably somewhere there’s a treatise on why this is the case. I think women get a kick out of breaking the heteronormative narrative through the story lines of the men, the ones put in charge of the plot. In Supernatural the women tend to be demon superbitches. It's a hunter's world. Well, you think you’re in control? Hah! you don’t even know you have the hots for each other.

So you go, girls (and everyone else writing this stuff). Subvert the dominant paradigm.