How to Live Safely in a Science Fictional Universe

Life is, to some extent, an extended dialogue with your future self about how exactly you are going to let yourself down over the coming years. 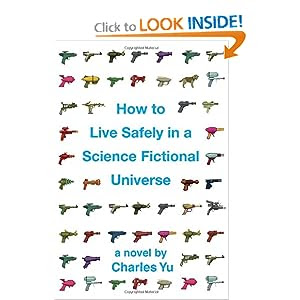 “The base model TM-31 runs on state-of-the-art chronodiegetical technology: a six-cylinder grammar drive built n a quad-core physics engine, which features an applied temporalinguistics architecture allowing for free-form navigation within a rendered environment, such as, for instance, a story space and, in particular, a science fictional universe.

I picked out this book because of the title. How could I resist? I happened across reviews of it here and there, nice buzzy happy reviews. It seemed to be much in demand. I was on a waiting list at the library so long that I almost forgot about it. In fact, when I finally got notice that it was available, I was really into reading a clockwork man.

From the start Charles Yu’s writing filled me with delight. Charles (who is also the narrator), is a time machine repairman. The book is written as a manual, interlaced with the narrator’s personal story. Yu creates elaborate technological and pseudotechnological constructs, real physics mixed with fantasy. And lest that sound drearily dull, the story is well padded with humor, from the holographic dog rescued from a space western to Phil, the dispatcher, a Windows program who thinks he is a real person with a wife and children. I think of Douglass Adams meets Italo Calvino, with a bit of Ecco thrown in.

You probably can guess from the title as well as that excerpt from the opening pages, that this is metafiction. Metaphysical metafiction. It’s so self-referential I’m surprised it’s still book-shaped. If you reduced the story to plot, it is about the narrator’s search for his missing father, a brilliant but defeated scientist. Together they had worked on a prototype time machine, one that never quite came together. Every memory is laced with regret and loss. In the course of his search, the narrator ends up stuck in a time loop after shooting his future self, who hands him a book, telling him that the answer is in it, in the book we are reading and which the present/future narrator is writing.

The theme of the story is memory, our very own personal time travel machine. We travel forward and backward at the same time. Also, the book is itself a time travel device, a little box transporting both reader and author from present to past to future. But more importantly, the story focuses on the potential danger of memory, how it can become a trap, an endless, obsessive loop.

Email ThisBlogThis!Share to TwitterShare to FacebookShare to Pinterest
Labels: books, Charles Yu, How to Live Safely in a Science Fictional Universe. metafiction, reading