Fallen but not far enough

I love reading YA novels. There’s something so fresh and hopeful about them.

Course sometimes they completely screw it up.

I recently got hold of the novel Fallen, by Lauren Kate. Thought I would check out this new angel obsession. Ye Gods. I know matters are falling apart when I start skidding down the slope, hopping over huge chunks of text, annoyed as all get out but unable to stop because, dammit, surely there’s a payoff here somewhere. 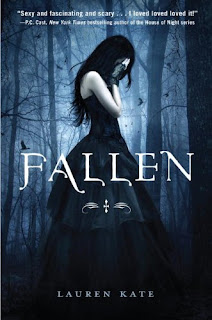 I liked the set up. Luce is a suspected arsonist (or something - her first kiss apparently incinerated her boyfriend) who lands in a reform boarding school in Savannah. I like that touch - Savannah. Luce mentions the humidity now and then to remind you where you are. In case you forget, there being no other indication of locale. So Luce, who also sees menacing dark shadows everywhere, is lonely and lost for all of two minutes at the new school when she spies the incredibly gorgeous and strangely familiar Daniel. Immediately she is captivated, drawn to him. He flips her off. It’s so adorable. Then there’s Cam, the sweetly attentive, equally gorgeous boy she’s drawn to but not quite so much. You know something’s wrong with him because he takes Luce on a picnic and a snake shows up. Later he gives her a pendant with a snake on it and takes her to a bar called Styx. Luce is completely dense when it comes to symbolism.

Besides being dumb as a sack of rocks, Luce is beyond annoying. She’s just so mysteriously drawn to Daniel. So so so so drawn. She can’t stop thinking about it, staring at him, having strange dreams about him. Her brain is always churning with Daniel. And what’s Daniel got to show for himself? Well, we know he’s an angel. Luce is too dumb to figure that out for ¾ of the book. Still, let’s see, when he’s not pushing her away with strange, cryptic warnings and comments, he’s kinda polite and friendly. This goes on for freakin ever. And not much else. Shadows come and go. You never really find out why the hell Luce can see them, or why she incinerated her boyfriend, but oh well, it’s probably in the sequel. Various stuff happens la la la, her parents visit, la la, a friend helps her research Daniel, la la la, the library catches on fire (I was hopeful there for a moment, but nah) and there are lots more scary swirly inky shadows everywhere! Daniel kisses her and is really taken aback that she doesn't explode, because he was totally expecting her to, quite literally, blow up. That's what an awesome kisser he is. And, oh, Daniel’s a fallen angel and Cam is too, and well, so are a number of students (what the hell is this school’s admission policy, anyway?), and there’s a big battle with locusts and fireflies or something but we don’t know why exactly, except they seem to be fighting over Luce but they can’t tell her why because it might explode her wittle brain. But as long as Luce can rest in Daniel’s arms, lost in his violet eyes, with his beautiful wings wrapped around her, what’s a little chaos, death and destruction?