And here is more of it

1. In the ongoing situation with my brother and his wife, it seems there are really no particularly good options. There is not enough money for assisted living, yet they aren’t poor enough to qualify for Medicaid. No one has the ability to take them into their home, and I think they would protest that quite strongly. We certainly can’t give her the 24/7 care the hospital thinks she needs, and I sincerely doubt that my autistic (or whatever he is) brother knows jack about testing blood sugar levels and how to judge the amount of insulin needed and probably won’t do much better with training. I could be wrong. He’s good with numbers and data. I don’t think he’s ever paid a bill late. Perhaps we can get a nurse to check in periodically – something that is quite expensive. I’ll have to hope that my brother has enough prescience to keep the house from burning down (although this is debatable – my family cleaned up their house last weekend and found a dead animal and threw out 20+ bags of trash, including stacks of paper filled with chess moves – at least I think they are chess moves and not some more arcane code). They don’t live close enough for us to check in on them frequently. This remains a puzzle. It’s sad that my brother has never been evaluated for learning or cognitive disabilities. Talking to him is an exercise in frustration. I think we’ve all just assumed that he was really neurotic from our screwy upbringing, but watching him now, I can tell there is a neurological problem. I don’t know that searching out a diagnosis in your 60s would be all that helpful. In any case, he isn’t so far gone as to need guardianship, so he has the right to do what he wants with regard to their wellbeing. It seems that the county will pay for a nurse to visit three times a week. 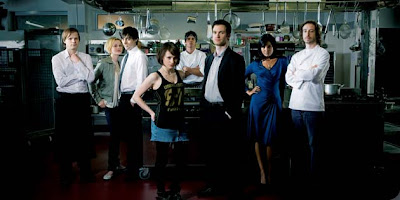 2. I wish this show - RAW - aired in the US, but I doubt it ever will. I’ve seen selections from it on YouTube, but they are all for just one story line, and the Irish network doesn’t have full episodes online. The show is set in Ireland, in the kitchen of a restaurant, with temperamental chefs and a motley crew of kitchen help and wait staff, all yelling at each other, having affairs, angling for power, and getting into all sorts of mischief. The episodes have great soundtracks, and the Australian chef is a bit of alright, too.

3. My amusement with foreign soap operas knows no end. I’ve now found a Welsh one and a couple of Spanish ones, a Dutch one and an Israeli one. The Dutch one is partly in Dutch and part in English, and there’s an American actress who looks just like Luke’s grandmother on As the World Turns. Yes, I’ve watched a little of that, too, just for Luke and Noah, but the plots are so wacked it’s irritating.

As I’ve mentioned, I’m following the gay story lines (and it seems to be all guys, for some reason), because that’s what everyone seems to upload. They are all pretty similar – two guys fall for each other but don’t want to admit they’re gay and spend as many episodes as possible struggling with it, angst-ridden and creating chaos and misunderstanding until the writers have worn them to bits and eroded everyone’s patience and they finally (1) declare their love and settle into domestic bliss, dooming themselves to a minor story line from then on; (2) declare their love and one of them gets beat up/is abducted/narrowly evades assassination by crazed homophobic relative; (3) declare their love and spend twelve episodes trying to bring their family round; (4) declare their love but one of them ends up running off with a girl for a while until he comes to his senses and spends twelve episodes trying to win back his true love, who is going to make him walk on hot coals first. The Welsh soap opera seems to be departing from formulas, as the kid is perfectly happy and comfortable with himself and his Dad’s attitude can be summed up as “Nobody in this village better discriminate against my son.” And they don’t. You might wonder where the dramatic tension is in that. So do I. I just like listening to Welsh.

Sigh. I just can’t resist posting videos, particularly if they’re over the top. (At least I hope this is over the top. No one has actually behaved like this, have they?). Here you see two young fellows struggling – literally - with the “coming to terms with it” stage. It’s not going too well. I happen to like the music in the opening sequence – so menacing and ritualistic. Ah, young love. I think the blond guy is kinda scary. I mean, look at his eyes. They say "I'm a National Front serial killer."