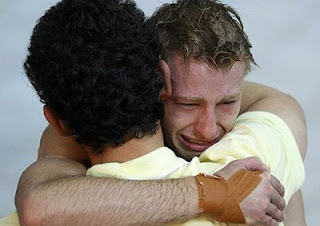 I stayed up way too late last night to see the closing ceremony of the Olympics. Wow. It was like a surrealist painting in motion. This was the first Olympics that I paid much attention to. I'm not really much into sports so I would usually either ignore them or perhaps check in on the gymnastics. But this time I got into it, as in I shouted encouragement at the TV screen. I saw Michael Phelps win several of his medals, and Shawn Johnson finally get hers, and Usain Bolt breaking the world record, and the US Women win the 400 relay.

I’m not much of a sports fan, and I wouldn't normally watch diving, but it sounded suitable artistic, so I watched the men’s 10 meter. How anyone can stand on their hands and then push themselves into a dive amazes me. I also didn’t know that you could jump into a body of water without splashing. Sheesh. I didn't know who any of the major players were, and only recognized a few names from watching part of the semifinals.

Those who watched the event know how exciting the last few dives were, when the tables turned and the Chinese, who were marked to win the gold, suddenly faltered. Even before he won the gold I liked Matthew Mitcham. His performance was incredible, particularly at the end, but what stood out for me is how happy he looked, how downright goofy at times. He could win an award for all-around adorableness. He didn’t even seem to realize what happened when he surpassed Zhou Luxin. Someone had to come up to him and tell him he won, at which point he broke down. I found his reaction touching, not just because it was so fun to watch someone so deserving win, but because he didn’t stand there beating back tears, looking grimly emotional—he flat out burst into tears.

I didn’t know anything of his story (and I guess I've been living in a cave), so it was just today that I found out he was the only openly gay man to compete at the 2008 Olympics. Well done. And as one web site put it, Cheers Queers!