Dr. Who Does Shakespeare

Note: the following is really just an excuse to show lots of photos of David Tennant. 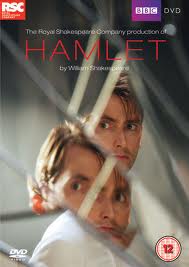 Perhaps it’s kind of geeky, but I’ve always liked Shakespeare. Well, pretty much always. I think I was unmoved by Romeo and Juliet when I first read it in junior high. I thought kids who killed themselves for love were super annoying. But sometime in high school we got this amazing new thing called cable TV, and it had this great arts channel (soon replaced by MTV) that broadcast a film version of a stage production of Hamlet, with Hamlet played by Ian McKellen. Oh. My. God. I watched it every time I could catch it (these being the years before home recording). Because of that single production, I never really experienced difficulty with the language. It wasn’t that I understood all the idioms and odd expressions of that time and place, but I got it, I was inside it.

Recently DramaQueen was studying A Midsummer Night’s Dream in school, and I began to feel that strange motherly compulsion to inject as much culture as possible into my offspring with the lest outlay of cash. Yea TV. So I went searching for free, streaming Shakespeare.

Imagine my delight when I ran across an RSC production of Hamlet on PBS. Hot. Dog. You can’t get anymore Shakespearey than the RSC. Then, much to my amazement, I found that Hamlet was played by the 12th incarnation of Dr. Who, and Claudius by Captain Picard. It was a pop-culture/high-culture bonanza! And no one was wearing a doublet. All the sets and costumes were contemporary, the surfaces sleek and reflective, surveillance cameras everywhere (it is a play with a lot of spying and snooping). And, my word, David Tennant owned Hamlet. I can’t say enough about his performance, and the other actors were exceptionally good as well. Every time a famous soliloquy approached, I wondered how he could possibly breathe new life into such familiar words, and each time I was mightily impressed.


For example, here is the first soliloquey:


And the Am I a Coward bit:

And here is one of my favorite humorous moments with silly old Polonius: