Monastery of the Holy Spirit 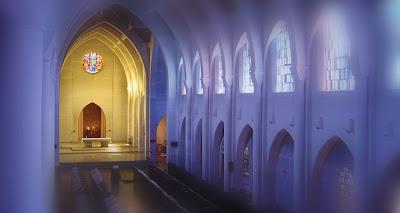 This is where Dear Husband and I went on Saturday for our anniversary. It was wonderfully peaceful. We saw a video about the history of the monastery. I couldn’t hear it very well. Someone behind me seemed to be slowly working their way through a roll of candies, slowly tearing the paper wrapper. The brother who was there to answer questions couldn’t hear a word anyone was saying. Seems his hearing aid wasn’t working so well. I don’t think anyone minded – he seemed such a nice fellow. There was a group there from Mars Hill (which one I don’t know) led by a man with a booming voice. He already seemed to know so much about the community that the brother sent him off as the tour guide for his group. It’s amazing how noisy people who don’t mean to be noisy can be.

The church is beautiful, quite simple but with lovely gothic arches and stained glass made at the monastery. I love chapels and cathedrals. They calm me the moment I walk in. Perhaps it’s the influence of years of prayers. The only cathedral I’ve been in that didn’t affect me that way was Trinity Cathedral in New York City, which has so many tourists going through it’s like a ride at Six Flags.

Later we went to the noonday prayers. I was keen to be there, because I’ve never sent that sort of service. Guests who were there on retreat could sit in the pews across from the brothers, but we had to stay way back. I’m not sure what scripture text they read from and I’ve no idea what they were chanting, but it was able to quiet my soul.

We had a little picnic under one of the trees on the grounds. The weather was perfect – mellow blue sky with soft clouds. A good day to rest and talk.

The monastery has a green cemetery, where people are buried without embalming, in biodegradable caskets, or in a simple shroud. That’s how I would like to be buried. I’ve never really understood embalming people and sticking their bodies in an airtight casket, where I assume it liquefies or something disgusting like that. Seems to negate “ashes to ashes and dust to dust.” After all, we aren’t ancient Egyptians who need our preserved bodies to march into the afterlife. Actually returning to the earth seems like a good idea. I only saw photos, but their cemetery seems to look like a natural habitat. The markers are not elaborate, and some people choose not to have them at all.

I, of course, was very interested in the bookstore. Poor Dear Husband had to drag me away. I did get a CD of songs from Taize, but I had to write down the titles of the books for another time. The CD is beautiful. Some of the churches in Atlanta have Taize services, but I haven’t tried to get to one. Can’t take the kids since they offer no childcare and Dear Husband’s work hours are difficult. Someday. After the experience of sitting in the monastery church, I found the service at our own church particularly jarring and the music flat and banal. Since all the worship is contemporary, with video screens, there are no windows, no natural light. The loss of natural light seems sad to me, as if we were in God’s nightclub. I complain about these things far too much, I know. There’s no reason I shouldn’t worship amidst the clamor and music, except that I find it makes me feel overstimulated and distracted, which is not how I want to be in church.
Enough about that. We had a lovely time together. Someday perhaps we will be able to go on an overnight retreat there.
Posted by Bad Alice at 12:06 PM